Rain came down hard over the weekend in Detroit. And it caused flooding in the Stellantis shipping yard, damaging lots of Jeeps, Dodge Durangos, and other brand-new vehicles. The city got around six inches of rain in less than 24 hours.

Stellantis’s Jefferson North Assembly Plant was one of many victims of the flash flood with many vehicles submerged up to their roofline. Vehicles such as the Charger, Challenger, and Jeep Grand Cherokee are all kept at the shipping yard staging area until they can be shipped to dealers.

As of now, Stellantis is unsure how many vehicles were damaged, telling Car and Driver it does not yet have an estimate about the extent of the damage.

“As a result of severe storms that came through Detroit on June 25, many expressways, surface streets, and neighborhoods in the area experienced significant flooding, including the Jefferson North Assembly Plant and an adjacent shipping yard,” the automaker said. “Water from the plant was removed and second shift resumed at 4:30 p.m. An assessment will be conducted on the condition of vehicles in the yard. We have no further information to share at this time.”

It’s reported that at least 50 people had to be rescued from their cars and over 350 vehicles suffered some sort of damage during the storm. That 350 is made up of people’s personal vehicles, not including the ones damaged at the Stellantis yard. 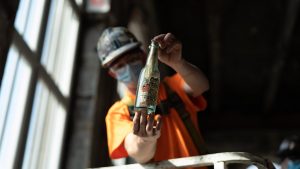 Winning at the Track with the 3000HP Diesel Master
Season 8, Episode 18