You would think it would be common sense to not post video evidence of a high-speed run in your Audi R8. However, this YouTuber was willing to do anything for the views.

British automotive journalist, Joe Achilles, is in hot water after posting a video to social media which got him attention from local law enforcement. The kicker is, he wasn’t even caught during the run but rather by officers later, who came across video evidence on his Facebook Page.

After it was all said and done, Achilles was fine the USD equivalent of $800 and took a six-point hit on his license after the video was posted of him speeding in an Audi R8 on the U.K.’s A57 Snake Pass. Achilles’ GoPro camera was outside the Audi however, the police were able to determine how fast he was going thanks to Google Earth data, a stopwatch, and some math.

After investigation, it was found that his average speed was well above Snake Pass’s limit of 50mph with 58 mph being his slowest speed and hitting 93 mph at his fastest.

So ladies and gentlemen, next time you think it’d be cool to have a video of whatever illegal stunt you’re doing…think again! 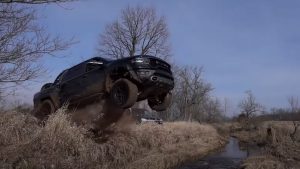