Toyota is one of the few automakers lucky enough to come out of the April-June time frame without a loss. Although sales are down a whopping 74 percent compared to last year, it’s not a loss which is more than almost any other automaker can say.

Globally, Toyota still sold over a million cars in the April-June period. The Associated Press reported that the automaker still managed to report a profit of 158.8 billion yen ($1.5 billion).

Per the Associated Press, “Although all the world’s automakers have been hurt badly by the outbreak, Toyota managed to stay in the black for the quarter, highlighting the resilience of the manufacturer of the Corolla subcompact, Prius hybrid, and Lexus luxury models.”

Honda and Nissan along with General Motors were among automakers to report a loss last quarter. Toyota officials said the sales decline was bottoming out, and that sales are expected to gradually return to near-normal levels as the year goes on. 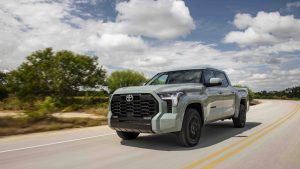 Toyota Steals Title From Ram As The Official Truck of Texas