The Fast and The Furious films have always been known for their non-stop, adrenaline-pumping action sequences using every possible mode of transportation imaginable: muscle cars, high-performance supercars, airplanes, tanks, and even submarines! So one must ask “what will they be using next?”

Recent videos and photos spotted on the set of the tenth film in the Fast & Furious saga (titled Fast-X) revealed some new vehicles fans can expect to see in the newest edition of the movie franchise.

Among the cars spotted on set in the Los Angeles neighborhood, Angelino Heights, was the upcoming Dodge Daytona SRT EV in its “Greys of Thunder” color scheme and light-up grille.

While official specs for the Dodge Charger SRT EV have yet to be revealed, it is built on an 800-volt frame and is believed to surpass the performance of Dodge’s SRT Hellcat engine.

The Fast & Furious films have always been linked to the Dodge Charger since the first film arrived in theaters in 2001. So as the franchise approaches its climactic conclusion, Dodge will help mark the end of the saga with the latest, fully-electric EV concept of its classic muscle car.

The other EV concept car spotted on set appears to be the Delorean Alpha5 concept, as seen by its signature gullwing door wide open. 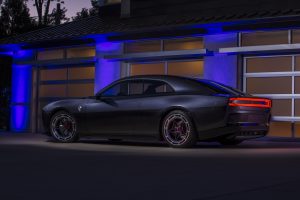 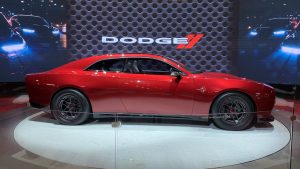