Although you are more likely to be involved in an accident on a city street than on the highway, it can still be a scary ordeal regardless of location. But one thing you should never do is simply leave your vehicle in the middle of the road. That is what one driver decided to do on I-35 in Minnesota after hitting a deer.

According to video footage from the Minnesota Department of Transportation, an abandoned red Chevy Silverado was found sitting in the middle lane as two semi-trucks drive toward it.

Unfortunately, the black semi-truck driver fails to swerve or slow down as it gets closer and closer to the pickup truck, ultimately smashing it off the highway into a ball of metal and fire. The semi-truck was also damaged, skidding onto the grassy median by the offramp.

The driver of the red Silverado, Susan Norberg, said that after striking a deer, she and her passengers sought safety behind the nearby guardrail. It is believed the truck had stalled from the impact, preventing them from moving it any further.

According to the Star Tribune, Minnesota State Patrol Lt. Gordon Shank revealed that there were no injuries resulting from the accident. 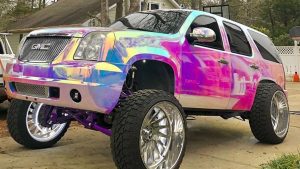