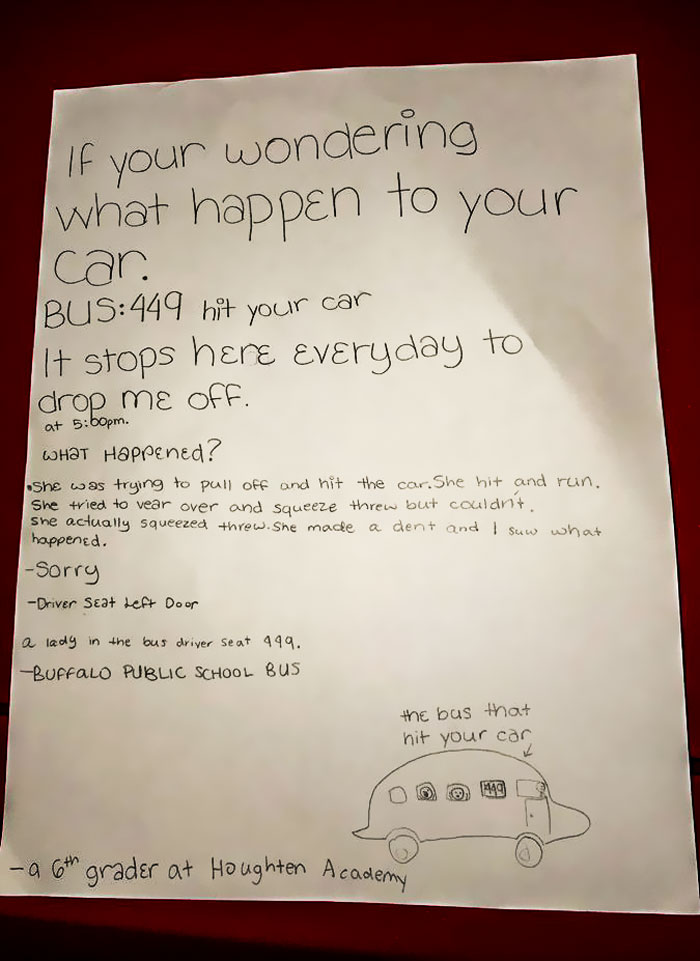 Sometimes kids are the best. Like this 6th grader that stepped up and helped a guy out when he was the victim of a hit and run. Andrew Sipowicz took to Twitter to let everyone see the awesome note he got.

Shoutout to the anonymous 6th grader for saving me a couple thousand (Bus not drawn to scale) pic.twitter.com/7aNK10xSwX

When he returned to his car to realize he was the victim of a hit and run, he soon found a note from an unexpected guardian angel. And since the bus driver who hit Sipowicz’s car didn’t fulfill the due diligence, a sixth-grade girl riding the bus decided to fill him in on the origin of the damage.

“If your wondering what happen to your car. Bus: 449 hit your car. It stops here everyday to drop me off. At 5:00pm. What Happened? She was trying to pull off and hit the car. She hit and run. She tried to vear over and squeeze threw but couldn’t. She actually squeezed threw. She made a dent and I saw what happened. Sorry. Driver seat left door. A lady in the bus driver seat 999. Buffalo Public School Bus.
A 6th grader at Houghten Academy.”

Sipowicz found the letter has been found and they’re in the process of finding a way to reward her for her actions.