There’s nothing quite like your first car. And actor Jason Momoa knows that. So he set up a surprise for his wife, actress Lisa Bonet.

Momoa surprised Bonet by fully restoring the first car she ever bought: a 1965 Ford Mustang. Over the years the Mustang was weathered and worn by the elements so Momoa reached out to Divine1Customs, a Las Vegas-based company to complete the restoration.

Aloha everyone, this is 14 years in the making. I wanted to surprise my wife with her first car she ever bought and bring it back to life and into our family, Mahalo to @bigkemdizel for bringing me to @divine1customs to meet Misha, I could not have done this without the love and support they put into this project. Link in BIO! full video on our YouTube Channel! Directed by @da_bray , this was Damien’s directing debut for our company @on_the_roam this last year and he put this all together to show the amount of love that went into this restoration. Thank you to everyone involved and the crew! @ppgrefinish As always big Mahalo to @colterwall for the music from Imaginary Appalachia, sleeping on the blacktop & Caroline. Please give the full video a watch on YouTube. link in bio & story. Aloha J @reddigitalcinema #1965mustang #firstcar #lisabonet #shotonred #leitzcine

Pretty much everything in the car was replaced. The original 289 small-block Ford V8 was also pulled, along with the four-speed stick. Everything was then put back together and what appears to be either a brand new crate motor from Ford or the original engine rebuilt was dropped in.

It’s a beautifully done restoration which makes sense being that Momoa’s car guy. He reportedly owns (or has owned) an old pink Cadillac, an F-350 camper, and a Land Rover Defender, among others.

“This is a big dream come true because this was my wife’s first car,” Momoa said in the video. “To be in this passenger seat with my wife here and surprise her and our babies in the back, riding in her first car when she was 17, I’m excited to see her face. It’s come a long way.” 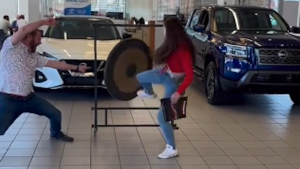 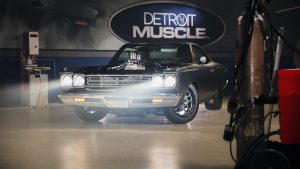 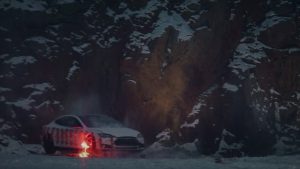