Some of us only care about numbers when it comes to who beat who, and for now, Dodge and their loyal following have those bragging rights. Their Challenger edged out the Camaro and Mustang for total sales in Q2. To be fair, the Ford Mustang sold better than the Challenger in Q1 of 2021, but the tables have turned as Stellantis reported 15,052 units compared to 14,676 ponies total.

Ford experienced a slight decline of 6.6 percent compared to the same time last year due to chip shortages, despite the market seemingly stabilizing. Being part of auto manufacturing has been a tough business over the past couple years, but everything seems to be rebounding as auto production increases. Still, despite the rough patch, Stellantis reported a 52 percent gain over their 2020 figures, meaning that Ford is going through today what Dodge dealt with last year. The odd part is that the Challenger is now 13 years old, but that doesn’t seem to be stopping buyers.

Unfortunately, the news is even worse for big three rival Chevrolet as Camaro sales are undeniably poor. The Chevrolet Camaro registered a paltry 2,792 sales during this same period, a 58.2 percent drop compared to the previous year. To put that into perspective, Ford sold as many Mustang’s in June as Chevrolet did throughout the entire spring period. Although the Camaro is expected to remain in production until 2026, these figures could mean something changes sooner.

While the chip shortage has plenty to do with the current hostile sales environment, it’s not everything. Mustang and Camaro sales have shown signs of decline in recent years, while Challenger sales have remained the most stable, which is a bit ironic because the other two have been refreshed while the Challenger, not so much.

Unfortunately, it seems as though 2021 will be a year of changes. With half the year already behind us, it’s important to note that Mustang leads in total overall sales by 3,638 units. There have been 33,786 Mustangs delivered compared to 30,148 Challengers, which overshadow the Camaro at 9,881. Even when Ford gets this chip shortage under control, there is a possibility the Challenger could move into the lead for total sales by year’s end.

The past few years have led to some unprecedented storylines in the auto market, but we can say, with certainty, that one constant has been the Challenger and Mustang alike. What are your thoughts? 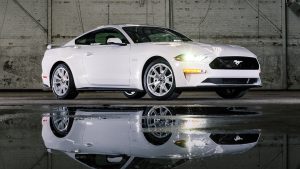