Florida man at it again. This time with a Toyota Camry and a stolen light pole.

Local authorities have charged Douglas Allen Hatley, 71, with grand theft after pulling him over on a Tampa roadway. Another driver called in to report a red Toyota Camry was hauling a giant pole nearly double the length of the entire car on its roof.

When asked how this even came to be, Hatley said he found the pole on the ground and wanted to sell the metal for scrap. Since he didn’t have a truck or trailer, strapping it to the roof of the Camry was the way to go. It’s reported by the Tampa Bay Times that a Hatley didn’t just “find” the pole, but a highway maintenance worker had actually reported the pole stolen.

Hatley told authorities that he didn’t realize it was illegal to remove broken utility and light poles from the side of the road. He was arrested and charged with grand theft while being held on $2,000 bond. 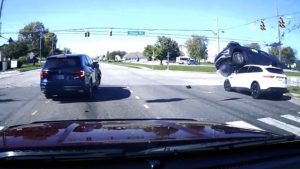