Drivers in Boulder County, CO are dealing with major car problems after unknowingly filling their cars with diesel. The mix-up reportedly happened at a Circle K in Boulder.

Dani Alexander told local news station Fox31 that she filled up her 2015 Subaru Forester at the station on Wednesday.

“I got gas and about three blocks later, my car started lugging and chugging,” said Alexander. “It’s a really good car and I just got it tuned up on Friday.”

Alexander thought her repair shop had forgotten to attach a line, so she called for a tow.

“The tow truck driver stopped the car, and said, ‘you’re the second person I’ve towed this afternoon with that problem.”

Alexander called Circle K, who then referred her to Travelers Insurance. The insurance company has agreed to pay for the $1,100 car repair, the tow and the tank of gas.

“They did admit it was their mistake,” said Alexander. “That they had been delivered bad gas that had diesel in it, and that’s where the plumes of black smoke were coming from.”

Although this particular situation has been resolved, she’s also worried about problems that could pop up down the road from the mix-up.

“I’m concerned about the future because my car just got paid for. It’s a good car and I can’t buy another car, so if something goes wrong down the line, will they reimburse me for that?”

Gas mix-ups have been a problem in the area in recent weeks. There have been dozens of customers experiencing similar mechanical problems after filling up at a King Soopers.

King Soopers has said its underground fuel tanks were mistakenly filled with the wrong fuel by an outside vendor. 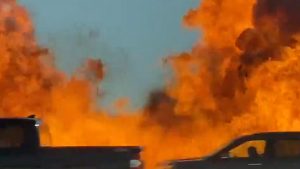