Did You Hear? Corvette C8 Has a Surprise at 500 Miles

Whether you’re a Corvette owner or in the market for the attainable mid-engine supercar, you can look for something special happening at 500 miles. With older engines, you know it’s important to drive it softly during the “break-in” period, but with cars today, they do the work for you, as you’ll find here.

Once you reach 500 miles, the torque in the engine, which is the key to its blazing fast take-offs, increases an estimated 30 percent. Not only that, the car starts to get faster. That beautiful V8 engine also starts to rev higher, developing full power and allowing Z51 models to reach the sub-3.0 second 0-60 time. Ah, the future is bright.

Admit it, when you bought the car, or any other fast car, you could barely resist the urge to floor the gas pedal out of the dealership. With today’s electronics and materials from GM, it helps the Corvette protect itself from the understandable urge of mashing on the gas pedal that might harm the engine.

Mike Kociba, assistant chief engineer of GM’s legendary small block V8 engines is on record saying that “people were really rolling the dice when they opened up the engine too soon ten or 20 years ago.”

Breaking in the engine is a crucial step before running it full out. Failure to comply with this suggestion can lead to a reduction in power and extra noise, which are issues that will haunt a vehicle throughout its lifetime.

Although breaking in an engine was once a standard procedure, many young drivers have never heard of such a thing today. Why? Engines and their controls are capable of enduring challenging conditions, although failure to break an engine in will still cause issues.

If you’re still a person who reads owners’ manuals (nice work), you’ll know not to exceed 50-60 mph for a couple hundred miles. For those who don’t, it’s to allow the oil to work its way into the nooks and crannies and settle firmly into place. This is how engines were initially broken in.

For many drivers today, it’s as if automakers would be speaking a foreign language, so General Motors gave the C8 Corvette an electronic guardian angel.

Kociba describes doing two things to the Vette. “First, limit engine speed. For the first 500 miles, the redline is 4,000 rpm.” Once the Corvette reaches 500 miles, the odometer speaks with the tachometer and the redline moves up to 6,600RPM, which is the speed where the engine can generate more power.

Driving the Corvette too fast or hard before oil coats all the parts is more than just a threat to the engine; it can also damage pinions and gears and make the rear end noisy.

To avoid destroying this mid-engine supercar, the Corvette limits torque to nearly 330-pound-feet of torque in first or second gear. Once you reach 500 miles, poof, the limiter disappears! However, the power won’t be available until the car has been turned off and restarted. Why? Getting an extra 140-pound-feet of torque without warning might be unsettling, said Kociba in typical engineer fashion.

General Motors recommends owners observe the 500-mile break-in period with any new vehicle. The C8 Corvette is the only car to offer this electronic fail-safe option because it’s the most powerful in the lineup, which is why it gets GM’s latest electronics. 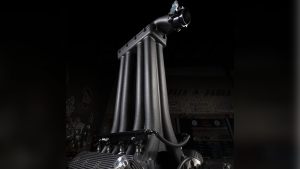