As a general rule of thumb, it probably is a good decision to be polite to any officer in any traffic stop. Especially if you’re trying to sweet-talk your way out of a citation.

However, a Michigan woman, Debra Lee Cruise-Gulyas, is fighting in protest of being cited for using her First Amendment rights. Cruise-Gulyas was pulled over almost two years just outside Ann Arbor. She stuck her middle finger out her window while driving away from officer Matthew Minard who had just cited her for a non-moving violation. Cruise-Gulyas was speeding, and while Minard originally had gone easy on her, decided to pull her over a second time after seeing her middle finger pointed in his direction. Minard then upgraded the ticket to a moving violation. Cruise-Gulyas later sued Minard saying he violated her First Amendment right to free speech and her Fourth Amendment right against unreasonable search and seizure.

Minard didn’t dispute any of the facts and made a motion for the court to dismiss the case. However, the court denied it, he appealed, and the appellate court upheld the denial. Cruise-Gulyas is still suing for an unspecified amount of damages.

Basically, this case found that it was illegal for Minard to pull Cruise-Gulyas over the second time because “fits of rudeness” aren’t illegal or “grounds for a seizure,” according to the opinion by circuit judge Jeffrey Sutton. A middle finger apparently qualifies as free speech.

That being said, a good lawyer can tell you that you cannot get away with what Cruise-Gulyas did if anyone else is nearby to see or hear your vulgar behavior. If that’s the case, the police officer may have probable cause to pull you over for breach of peace or disorderly conduct. 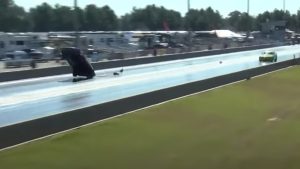