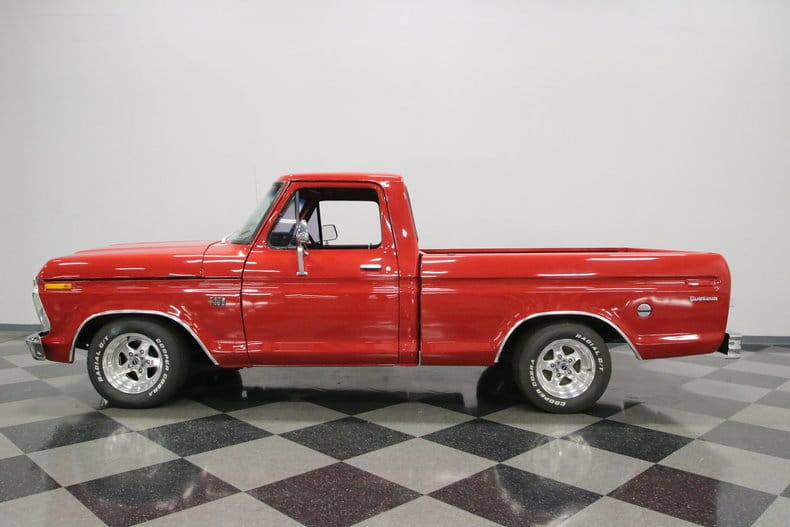 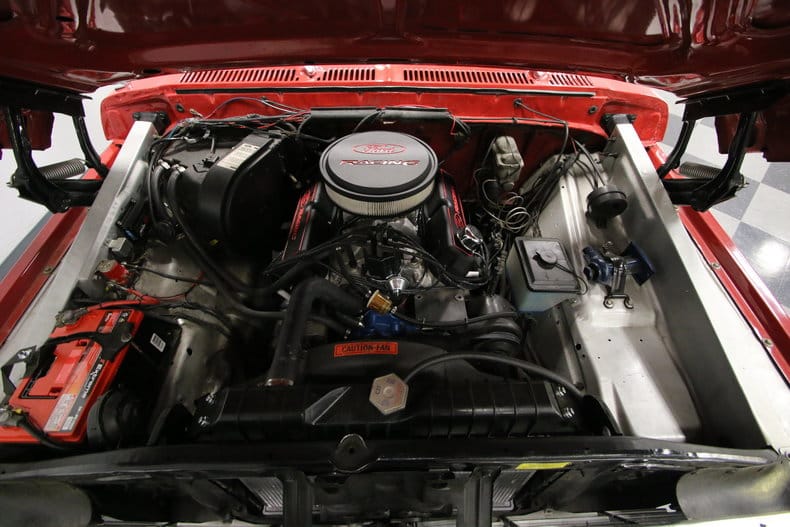 To all the great reasons there are to own and drive a mid-’70s F-100, add a few more for this particular one. It started out as a clean, never wrecked truck, which was treated to a frame off restoration. But then, it was powered up, lowered down, and featured in the shop! 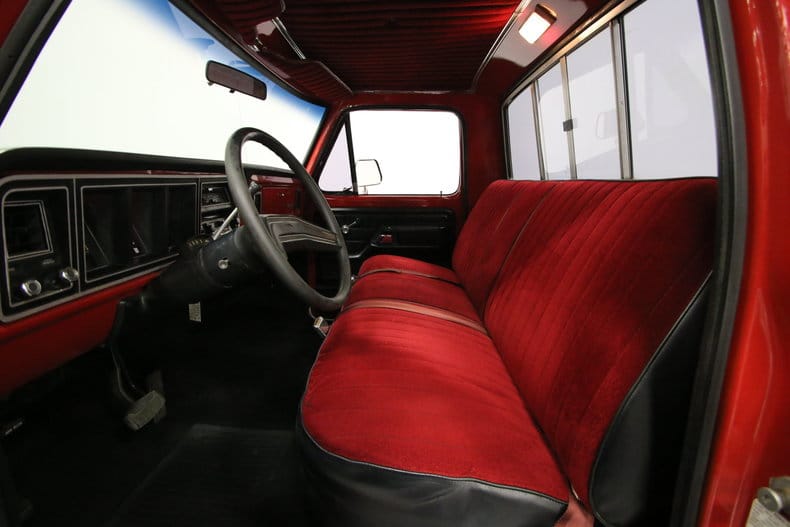 This truck looks fantastic in its Candy Apple Red paint. Part of the reason for that is because it was done as part of a frame off restoration. So, it was completely disassembled, stripped down, received some TLC here and there, and was prepped properly. All the nooks and crannies could be reached and primed and sprayed before reassembly. The frame was powder coated and the undercarriage was painted too. The grill and brightwork look perfect and the chrome trim around the wheel-wells adds a nice splash of chrome too. The embossed FORD on the tailgate appears crisp and clean in white letters. F-100 badges appear on the front fenders, and Custom badges on the rear. It sits on Prime 5-Star design racing alloys with Cooper Cobra Radial GT white letter tires that complement the look nicely. 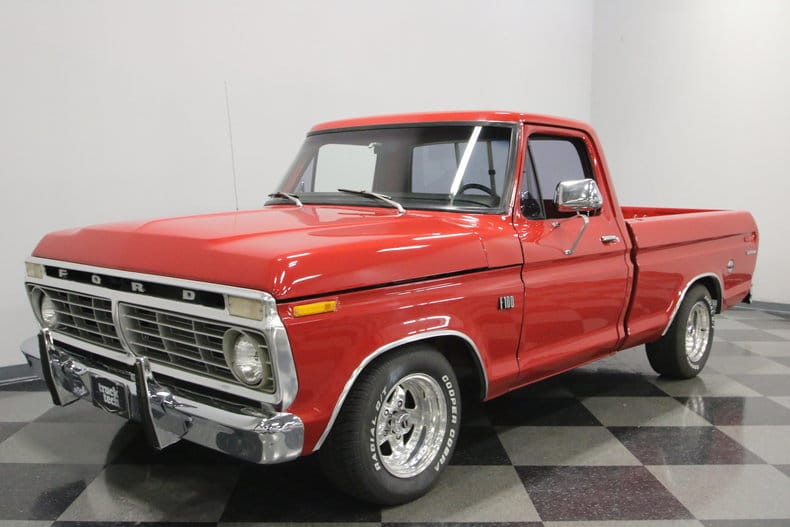 Of-course the first-class paint job carries through to the interior on the doors and the dash. The door panel itself is black vinyl with a nice big molded armrest for comfortable cruising and a carpeted lower section. There is a two spoke Ford steering wheel with a column shifter for the automatic trans sitting in front of a dash that is topped in black vinyl and is neat and clean and stock other than an aftermarket FM/Cassette player. The upholstery is a work of art. The bench seat is red pleated cloth with black piping and black vinyl lowers. The headliner and the visors get the same pleated treatment in red cloth, look fantastic, and should make this truck ride nice and quiet too. Custom appears on the glovebox and it is all tied together with black carpeting that looks brand new. 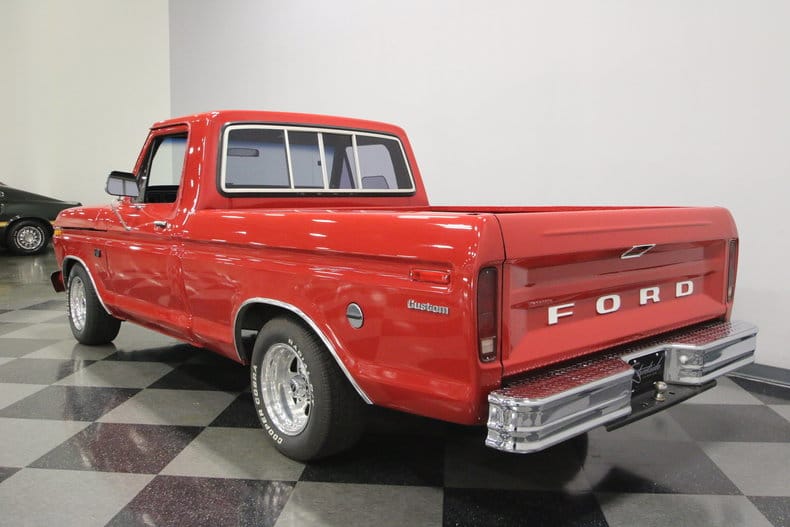 The guys took it over to Engine Power and dyno tested it before and after mods. It showed that it went from 146 horsepower at the rear wheels for the stock 351 Windsor, to 245 by the time it was done. 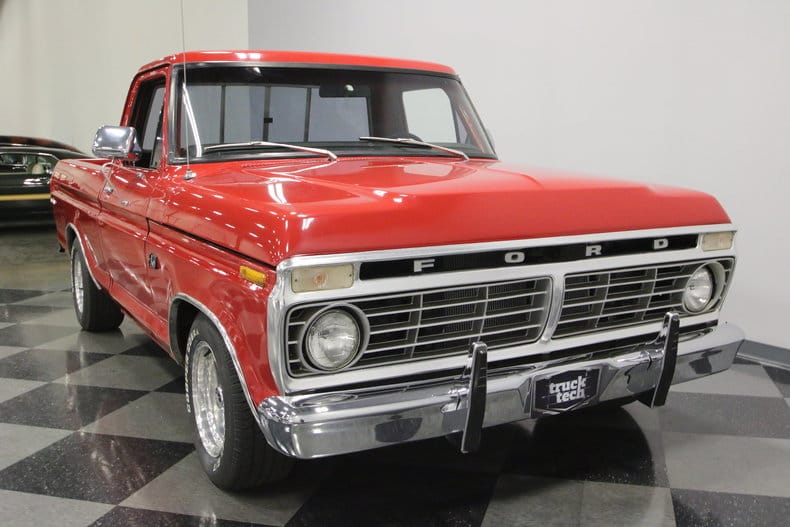 Pop the hood and take a look. It looks good with a black and red Ford Racing air topper and valve covers. Then there is a Holley 650 carburetor that feeds an Edelbrock RPM Airgap intake. Then a set of Edelbrock performer RPM heads were called for along with a new camshaft and lifters to make everything work well together. A double row timing gear set was installed for reliability and a Digital HP ignition box along with Pertonix coil and distributor assures good spark. 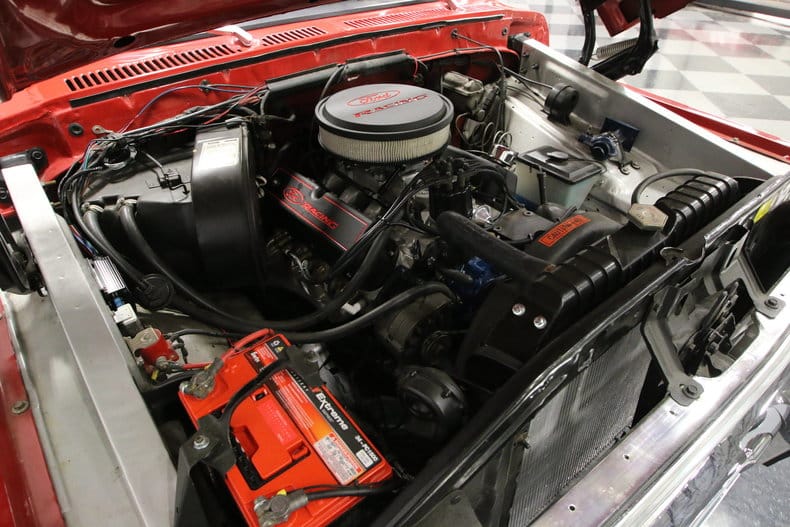 A Summit Racing extractor exhaust system helps it breathe out and makes the truck sound good doing it. To make the truck handle better, the suspension was dropped using LMC suspension pieces. Replacement I beams dropped the front end 4″ and replacement spring hangers with new shackles lowered the rear 3″. Adding sway bars front and rear keep it cornering nice and flat. A 9″ diff with 3:89 ratio and 31 spline TruTrack LSD was also installed to handle the increased power. 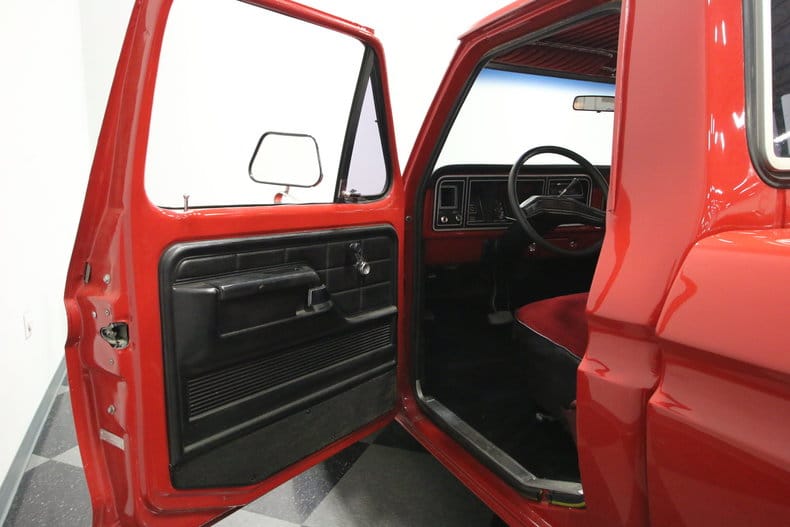 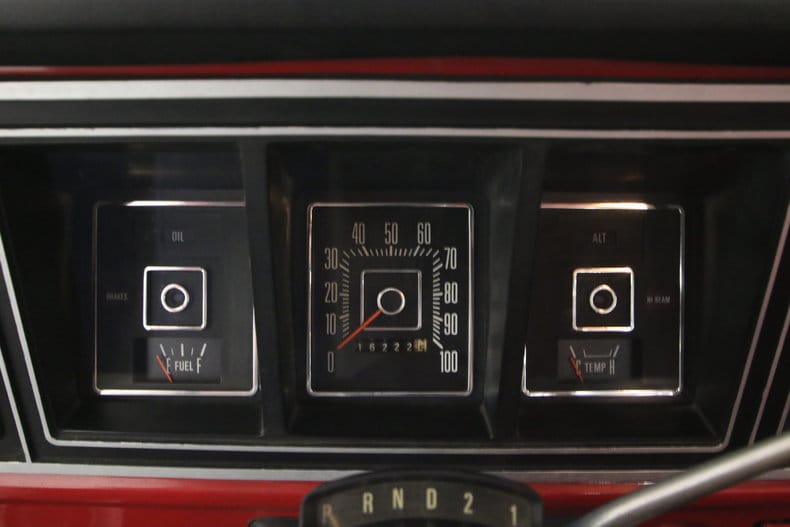