A group of random strangers is being hailed as heroes by the local community after they successfully stopped a runaway car with their bare hands after the driver was having a medical emergency. Now the Boynton Beach Police Department is hoping to identify the individuals to properly honor them for their actions.

In a report by WCTV, a woman was experiencing a medical episode that caused her to slump over the steering wheel of her car. Noticing this, the woman’s co-worker ran out into traffic to get the attention of other motorists.

Soon, several motorists and bystanders ran out to physically stop the car with their bare hands. One individual took a dumbbell from their car to smash the rear window. From there the group was able to steer the car safely into a nearby parking lot.

A nurse who is in the parking lot called 911 and was able to provide medical assistance before emergency services arrived.

One of the identified samaritans was Davita Peele, who helped direct traffic while the others focused on maneuvering the victim’s car. “I got out of my car because people started to blow through the light change and people didn’t see what was going on so I’m like ok just go around don’t go this way, go that way,” said Peele.

Peele had just finished her shift delivering mail for the U.S. Postal Service, then found herself helping save a stranger’s life.”I helped someone avoid getting into an even worse accident,” she said. 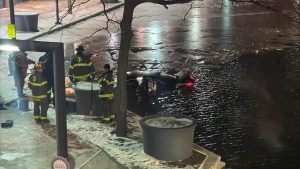