Dan Parker was racing his Pro Mod Chevrolet Corvette back in 2012 when he came in contact with a retention wall. Parker survived the crash, however, it did leave him permanently blind. As you can imagine, an injury like that stops a racing career.

As of this year, Parker wants to get back behind the wheel and not only race but set the land speed record for a blind person. In a Facebook post, Parker explained that the idea came to him in a dream six months after his crash. With the help of his friends, donations, and sponsors, Parker built a three-wheeled, 70-cc motorcycle and took it to the Bonneville Salt Flats, where he became the first blind man to compete in summer of 2013.Parker took it even farther the following year, taking an FIM-recognized world record for his class, with no special dispensation for visual impairment.

With several accomplishments under his belt, Parker heard of Mike Newman who held the record for the highest top land speed (200.9 mph). So with his modified 2008 Chevrolet Corvette, Parker is setting out to beat that record.

The Corvette is equipped with an audio guidance system based on GPS. So Parker and his team plot out the entire track and if he strays from the plots on either side, a tone goes off in that ear.

To help with funding, Parker has a GoFundMe page with a $20,000 goal that he plans to use for his return to Bonneville. If you want to follow his story more closely, PBS is airing a documentary on him titled, Driven Blind.

We wish him the best of luck! 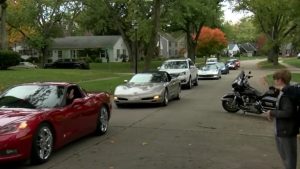