An accident in any vehicle is a tough pill to swallow. It’s even tougher when the vehicle is brand new…as in still has the temporary tags. And although that’s exactly what happened to Austen James McElroy and his brand new Dodge Ram 3500 dually, it was nobody’s fault but his own.

McElroy allegedly was under the influence behind the wheel of the truck and Steve Dempsey was witness to the crash. He posted the encounter to his Facebook page with photos:

Brand new 2020 Ram dually Cummins, 3 weeks old, still had the paper tag, was west bound on 95, he passed a car after…

Dempsey was on his way to work when he saw the truck speeding towards him. After passing a car on the straightaway on Ohio State Route 95, the driver was unable to slow down enough for an upcoming curve which led to the accident. Dempsey slowed his vehicle down to a stop in anticipation of what would happen.

After the dually driver lost control on the curve, the truck hit a ditch and then went into a culvert so hard the Ram was launched into the air. The truck actually cleared a 7-foot tall road sign, and barrel rolled before landing in another ditch. It’s a miracle neither Dempsey nor the truck driver or passenger were seriously injured from the accident.

Looking at the photos Dempsey posted, it gets more insane with each picture that shows just how much damage the Ram sustained. It appears that the entire rear axle detached, all airbags deployed, and most of the front end including the grille, bumper, and headlights are missing.

Dempsey’s vehicle also sustained damage, although not as severe. The Lincoln MKC had hood and fender damage.

The police report states McElroy was charged with failure to control and operating a motor vehicle under the influence. So while this story truly is a testimony to the safety and technology of modern vehicles, driver skill and responsibility is still one of most important aspects of driving. 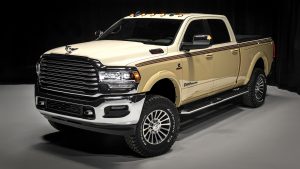