At SEMA 2022 some of the coolest things you’ll see are the newest car models that will be coming out in the next year, some insane project builds, the newest in tools and parts, accessories, and the list goes on and on.

But there is one car that is so rare that it can appropriately be named a unicorn just so happens to be the actual unicorn from the film Gone In 60 Seconds, the famous Ford Mustang GT500, aka “Eleanor.” How rare are we talking? “Eleanor” is number seven of the eleven “Hero” cars, of which there are only three left in existence. Meaning it isn’t a mockup or a resto-mod. It is 100% the real deal.

Designed by Steve Stanford and Chip Foose, every inch of the Mustang, from its Shelby-style hood, its fender flares, rocker panels, scoops, etc, has had the TLC of expert hands behind it.

The owner of the car, Christian Zöllner of the German-based dealership Chrome Cars, has had a lifelong passion for rare cars, and his hunt for “Eleanor” ironically runs parallel to Nicholas Cage’s character in the film the car is known for. “I was hunting this car for many years, seventeen to eighteen years. I started to be a fan since day one in 2000, which is actually twenty-three years!”

These days technology has made finding extremely rare cars like “Eleanor” much easier to find. But try accomplishing that same feat in the year 2000, with no internet, from Germany. “It was really tough,” says Zöllner. “The only thing we had were the products used on the hero cars, like all of the TCP stuff, the Wilwood stuff, that they had in magazines over in Germany [with] pictures of ‘Eleanor’ they used.” Zöllner best describes his search for his unicorn as “a hunt”, and during his hunt, he came across a company called “Cinema Vehicle Services” which was responsible for the Mustang’s appearance in the film.

“And then the chase began!” says Zöllner. “It was tough, but it was fun.”

The hunt was one thing. But the moment when Christian was finally able to lay physical eyes on “Eleanor” really was like something out of a movie. “Being up close to one in that moment was… yeah, I got teary!” His excitement was clearly genuine because it was this moment where you could see the hair on his hands standing up.

Now that his hunt is finally over and he finally caught his unicorn, is there another rare and evasive car out there Zöllner has his eyes on? “Not really. Not in the movie world.”

Zöllner also notes that now that the rare Mustang GT500 is part of a 250-car collection, he will take “Eleanor” out for a spin from time to time. “In large collections, you’ll see cars dying when they’re just standing around.” Of course, he puts a strong emphasis on caution when taking it out on the road. “It’s fully insured. All is good. We are fully covered. But with ‘Eleanor’ once she’s gone, she’s gone.”

However, Zöllner also notes that they even purchased the molds that the original “Eleanor” was built by Chip Foose. “We’re not just collectors. We’re telling stories.” 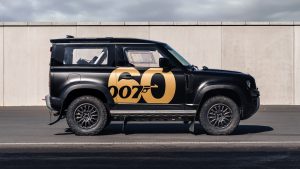