A Tesla Model 3 went up in flames after a crash in Moscow, Russia. Instagram user, gagorun, caught the moment of the explosion on film and posted it.

It’s reported by local news that Alexey Tretyakov was driving his Model 3 near Moscow when he claims he collided with a parked tow truck. And yes, Autopilot was engaged. The tow truck was allegedly stopped on the left-most lane of the road. Luckily, all three people inside the vehicle were able to escape before it went up in flames.

Tretyakov doesn’t blame Autopilot for the accident, though. He admits to being distracted at the time of the crash and that he did not engage the brakes. 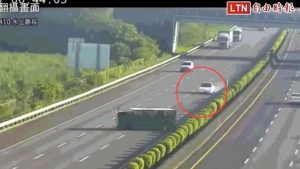