Jeep and the Jurassic Park franchise are so closely tied to each other just like Velociraptors and clever girls. Awaiting the June 10th release of Jurassic World: Dominion, which is believed to be the final installment of the Jurassic Park films, Jeep has released its latest ad for the Jeep Wrangler 4xe starring a baby Carnotasaurus.

Most movie fans will remember that famous scene from the first film of the main characters being chased by an adult T-Rex in a Jeep through the woods. This time, the dinosaur is along for the ride. The owner’s neighbors though may have a different opinion.

If you are part of the brand’s loyalty program Jeep Wave, members have the opportunity to view the film at special drive-in events on June 8th in Detroit, Chicago, New York, Miami, Los Angeles, and on June 9th in Warwick, NJ.

Having a permanent presence throughout the Jurassic Park films, the Jeep Wrangler, Jeep Gladiator, and an old-school Grand Wagoneer can be spotted in the new Jurassic World: Dominion movie. 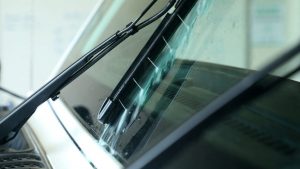