Today on PND…
• A 2,000 Horsepower Lamborghini Huracan Runs 7s In The ¼ Mile
• Firefighters Rescue Vintage Ford Mustang Shelby GT350 From California Wildfires
• Someone Returned A Stolen Car With An Apology Note
• Chevrolet Is Offering Free Fixes For Unexpected Airbag Deployments
• And Another Case Of A Dealership Employee Taking A Customer’s Car For A Joyride

7-Second Lamborghini
You don’t typically see Huracans on the ¼ mile but that’s exactly where Dallas Performance brought theirs. They wanted to test the 2,000 HP beast on the strip and ran a few ¼ mile passes. They managed to dip into the 7s with a pass of 7.916 at 186.74 MPH! This is also the Huracan that holds the ½-mile record of 208.2 MPH. This car gets it done! Thanks to That Racing Channel for uploading the video!

Shelby GT350 Rescue
It has been a devastating weekend for California. Much of the state has been battling wildfires leaving people and animals evacuating to safety. Unfortunately, people have had to leave cars, homes, and belongings behind. One crew of firefighters in Malibu came across a rare 1966 Ford Mustang Shelby GT350 in a garage and couldn’t leave it there to burn. They managed to push the car near a cliff, far enough away from the flames. Nice work, guys. We’re sending our thoughts to all those affected.
Photo credit: @421CHEVAUX

Stolen Car Apology Note
When your car goes missing you almost never expect to have it returned to your driveway 3 days later. But local news WHAS11 reports that’s exactly what happened to Pamela Barker, of Louisville, Kentucky. Her GMC Acadia was stolen from her driveway last week, so naturally, she reported it stolen to the police. However, after 3 days she woke up to find the car was back in her driveway…and with a note! The thief must have been feeling guilty and brought the SUV back.

The note read: “Sorry about your car. I broke into your car and found your keys and drove. I’m really sorry because I understand how hard it is not to have a car so I brought it back. I know this won’t fix it but oh well. Much love for you.”

Chevy Airbag Fix
A while back we covered the story of some Chevy Colorado ZR2s with airbags that were randomly deploying. People were reporting that they had airbags going off on minor off-road trails or other non-apparent reasons. Chevy now has a fix if you are one of these people. There is an update that recalibrates the threshold for the airbag deployment and Chevy will update it free of charge if you bring your vehicle into the dealership for service. Chevrolet has a toll-free number you can call at 800-833-2438 for any questions.

Dealership Employee Joyride
We’ve seen it before but you would think with all the technology and dash cams, dealership employees would get the hint: stop taking customer’s vehicles for joy rides. Jalopnik reports that Jon Martin took his 2016 Chevy Corvette into a Michigan dealership for an airbag recall. To be clear, this problem was fixed solely by a software update and there was no mechanical work done at all. It should also be noted this car has a “Valet Mode” which records out the front dash. You can watch as the employee takes the Z06 out and at one-point hits 94 MPH in a 45 MPH zone. Martin reached out to the local police department about citing the driver as an unauthorized user of the vehicle but no files were charged. How upset would you be?

Hyundai Has An Official Fix For The Palisade Interior Smell Problem 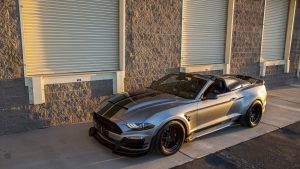