Tesla CEO Elon Musk has put his money where his mouth is and put the newly-debuted Tesla Cybertruck up against the Ford F-150 in a tug-of-war challenge after claiming his pickup is a “better truck than an F-150.”

The Cybertruck was revealed earlier this week and already has over 200,000 orders placed aside from the armored glass mishap that took place during the unveiling.

Musk Tweeted out the video of the Cybertruck pulling the F-150 with screeching tires up the hill. However, Ford thinks the matchup was an apples-to-oranges situation with the two-wheel-drive F-150 put up against an all-wheel-drive Cybertruck.

Ford X vice president, Sundeep Madra, also took to Twitter to challenge Musk by asking for Cybertruck to be sent to Ford:

In typical Musk fashion, he responded simply with “Bring it on”. You can say a lot about Musk but being humble isn’t one of those things.

To put things in perspective, the Cybertruck’s towing capacity is 10,000+ while the Ford 1-50 has about a 13,000 lb. payload. However, again, the F-150 is rear-wheel-drive while the Cybetruck is all-wheel-drive.

Do you think it was a fair matchup? Or did Musk set it up with an obvious advantage for the Cybertruck? 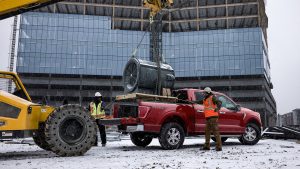