Things didn’t end well for an NYPD officer who decided to pop a wheelie on a confiscated dirt bike. A video has surfaced of the crash which shows the officer incorrectly navigating traffic and coming to a stop after crashing into a nearby vehicle.

It started with a relatively small wheelie but escalates after he runs a red light and dodging at least 3 cars in the intersection. The hectic encounter causes the officer to lose control and send the bike flying into a nearby car. It’s reported that the officer found the bike abandoned at the intersection in question after a man had been riding recklessly through traffic and ditched it.

The NYPD says the incident is under internal review. 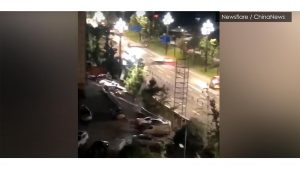 The Winner Is In! See Which Car Was Voted Top Muscle Car Of The ’60s and ’70s
View Comments