Back in September 1992, a Mercedes-Benz convertible was reported stolen in Palo Alto, CA. Three decades later, that reported vehicle was discovered by a team of landscapers buried 4 to 5 feet underground in the backyard of a $15 million mansion built by a man who was previously arrested for murder, attempted murder, and insurance fraud.

According to authorities, cadaver dogs alerted them to possible human remains, though none were found more than 24 hours after the San Mateo County Crime Lab began unearthing the car. So far, only bags of unused cement were found in the vehicle.

“They are going through a landscaping project, so it’s quite possible it could be worker who got cut and dripped some blood on the ground. We just don’t know what the dogs are reacting to until we discover it.” says Atherton Police Commander Daniel Larsen.

Officials note that the possible owner of the Mercedes-Benz is likely to be deceased, and is awaiting confirmation from the DMV.

The current homeowners of the mansion are not under investigation.

The home was built by Johnny Lew, who had a history of arrests for murder, attempted murder, and insurance fraud, according to his daughter Jacq Searle. She claims the family resided on the property in the 1990’s, which is the same time the car was reported stolen. Lew was reported deceased in 2015 in Washtington state.

Lew was found guilty of murder in 1966 and released in 1968 after the California Supreme Court reversed his conviction, stating hearsay evidence that should not have been admitted into the trial.

Lew was convicted on two counts of attempted murder in 1977 in Los Angeles where he spent three years in prison.

In the late 1990s, Lew hired undercover police officers to take a $1.2 million yacht and sink it in international waters. He was later arrested for insurance fraud.

Authorities have not confirmed whether or not the buried Mercedes-Benz was registered under Lew’s name. 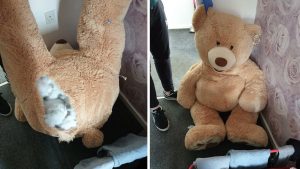