With all the politics and negativity in the news these days, a story like this one is very welcomed.

A Fort Wayne, IN man set up a surprise for a local boy fighting brain cancer. When Sam Collins came across an old photo of his 1955 Chevy truck in a newspaper from a year ago, he noticed 10-year-old Kyler Drenning was in the photo admiring the truck.

Collins found out Kyler was diagnosed with a rare brain cancer when he was just 4-years-old and decided to track the boy down via Facebook and surprise him. Knowing Kyler was a Chevy fan, Collins got to work setting up a Corvette parade for the boy.

Collins let Kyler sit and hang out in the beloved Chevy truck that started the whole thing after the parade of more than 20 cars went by. As a bonus, the Fort Wayne Corvette Club gave Kyler a ride in one of the Corvettes!

We love seeing the car community stick together. Get well soon, Kyler. 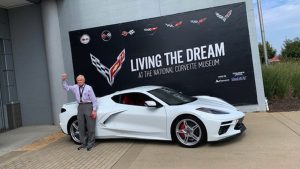